John Bell was an obscure York artist who, for a brief time, played a significant role in the cultural life of his home city. He helped organise the Yorkshire Fine Arts and Industrial Exhibition, which was held in the summer of 1866 in a temporary building in the grounds of Bootham Hospital. The success of the exhibition – it attracted 338,000 visitors and made a profit of £2,200 – led to the establishment of the permanent exhibition hall in Exhibition Square, which now houses York Art Gallery.

The 1866 exhibition building contained two galleries dedicated to the Fine Arts, allowing space for nine hundred pictures to be displayed.  As a member of the Fine Arts Committee, John Bell was involved in the arrangement of the pictures, providing assistance to the Secretary, William Wallace Hargrove, who was the proprietor of the York Herald. Hargrove owned the three paintings in the exhibition that were painted by Bell himself. These were a view of Capri and two local landscapes, York from Scarborough Bridge and York from Skeldergate Ferry, which passed to York Art Gallery from Hargrove’s estate in 1919.

Bell also designed the exhibition prize medal, which is a superb example of medallic art and an outstanding celebration of civic pride. Figures from classical mythology and York’s historical past highlight its antiquity and status as the capital of Yorkshire, the centre of arts, science, learning and justice. There are vignettes of the artist William Etty and the sculptor John Flaxman, both natives of York, of whom the City was particularly proud. 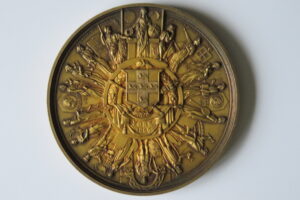 A brief account of Bell’s life can be found in the manuscript ‘Dictionary of York Artists’ by John Ward Knowles (1838-1931), in York Explore. According to Knowles, Bell was born in 1823 and died in 1881. These dates differ from those given on the ART UK website (accessed on 20 May 2020) of 1793 and 1861, but are supported by evidence from parish records, newspaper reports, and other sources. Furthermore, the artist is unlikely to have died in 1861, because the painting York from Scarborough Railway Bridge includes an image of Lendal Bridge, which did not open until 1863.

John Bell was born in Walmgate, York, in 1823 to Thomas Bell, a joiner, and his wife Mary, née Hazelwood. He was baptised on 26 November 1823 at Saint Margaret’s Church, Walmgate. Parish records show that he had six younger siblings, including a sister, Ann. He was educated at Hope Street School, Walmgate, and for a while worked as an apprentice in his father’s trade, but a talent for drawing was spotted and he enrolled at the newly founded York School of Design. Initially, he thrived there and won prizes for his artwork, but does not appear to have completed the course. As Knowles put it, ‘being of a frolicsome disposition he unfortunately carried his pranks too far, and was suspended’. We will never know what the pranks were, but this anecdote provides a tantalising glimpse into the young man’s character.

After leaving the York School of Design, Bell took lessons from the local artist and scenery painter, Thomas Edward Newnum, before moving to London to pursue a career as a professional artist. In London he produced pencil sketches and copies for printmakers, before turning to oil painting and making enough money to travel to Italy to practice landscape painting. He returned via Paris, where he was hired by an English firm to sketch objects at the Paris Industrial Exhibition. This was strictly against the rules and amounted to industrial espionage, so he appears to have done it surreptitiously. After returning to York, he set up a studio in College Yard and worked closely with the principal of York School of Art (as the York School of Design had been renamed) until a ‘misunderstanding’ between the two men resulted in a move to premises in Hull Road. Once again, we have the impression of a characterful individual.

After the 1866 exhibition Bell painted a ‘large and fine’ landscape of Newstead Abbey, but his attempts to master a technique referred to as ‘transparent painting’ were unsuccessful (if you know what this technique entailed, do please get in touch). The reaction to a transparent painting he produced for the visit of the Prince of Wales in 1869 must have been disappointing. Knowles described it as a failure because ‘it was too much crowded with work and he did not understand the use of Transparent colours sufficiently to obtain brilliance’. Two ceilings painted by Bell in a newly built mansion were similarly dismissed on the grounds of poor artistic technique. Perhaps it was due to a downturn in his career that he moved to Scarborough, where he became well known as a local landscape artist and is recorded there in the census of 1871. The Scarborough Gazette mentioned that some of his best paintings could be seen at the gallery of Mr Edward Fadon in Huntriss Row. In 1875 another newspaper reported that some of Bell’s ‘well-known’ paintings of Scarborough were being exhibited in Leeds, and the following year a Fine Arts auction, also in Leeds, included some of his Italian landscapes.

On 6 May 1881, a death notice appeared in the York Herald stating that John Bell, son of Thomas Bell, had died in Edinburgh on 1 May. He was fifty-seven years old. The death, from tuberculosis and bronchitis, was registered by his sister, Ann. The certificate has the correct names of his parents, including the maiden name of his mother, and lists his occupation as landscape painter. It appears reasonably certain that this is the same John Bell who once played an active role in York artistic circles and contributed to York’s cultural history through his role on the organising committee of the 1866 Yorkshire Fine Arts and Industrial Exhibition.