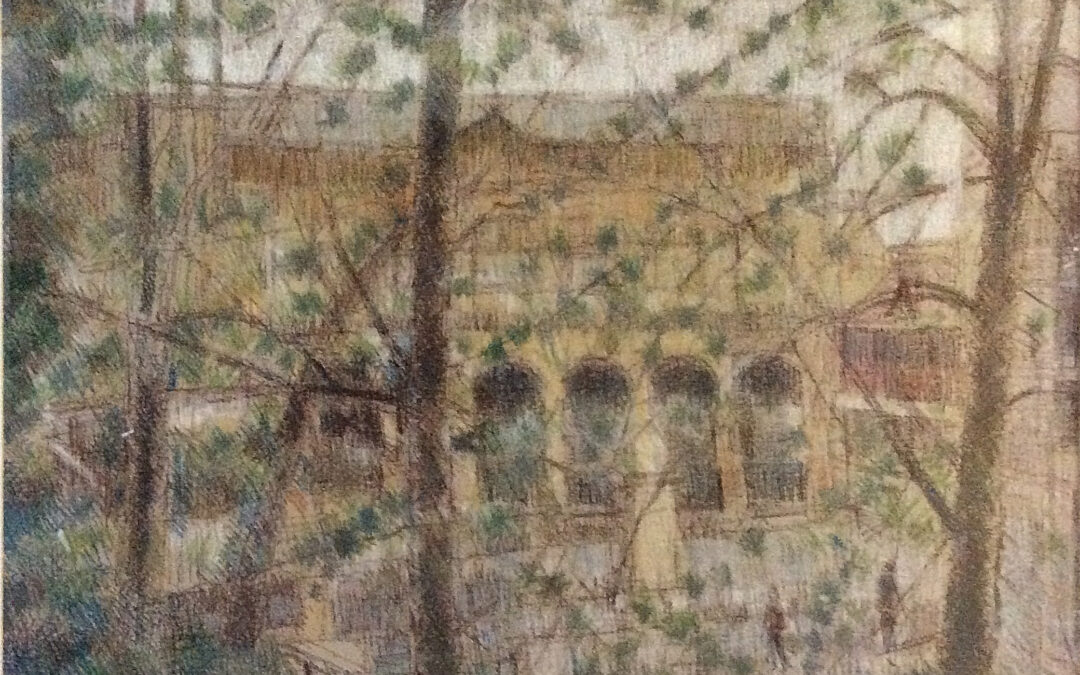 A Friend writes about a much-loved picture by a Yorkshire artist in her collection.

My first impression of Jake’s painting of York Art Gallery was the unusual perspective. Where on earth had he positioned himself to capture this view? It looked as if he had been perched on a cherry picker looking straight down onto Exhibition Square with William Etty and the Gallery directly behind. Sometime later Jake confided in me that he had been squatting awkwardly, confined in the higher recesses of the Theatre Royal, rather like a pigeon.

I had been immediately attracted by the thought of viewing this work as a long term admirer of Jake’s work and especially his lovely enigmatic oil pastels of York Minster. In an exhibition of the views of York in Minster Library some years before, Jake’s roofline views had stood out with their soft rusts and greys, their space for imagination, and their take on a much loved cathedral. And then, with this work, there was the added attraction of the subject. For a Friend of York Art Gallery, the combination of an admired artist and the source of much pleasure, education, and entertainment was compelling. So, when I heard that this work was for sale, I made arrangements to view it. 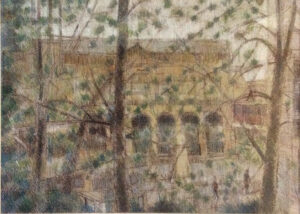 Jake Attree, York Art Gallery, reproduced with the permission of the artist

Although Jake had again used oil pastel, here was a transformation of palette from the more usual red-brown hues to an altogether lighter, soft green and stone which offered up a new side to his work. Was he branching out in a novel direction? It certainly seemed so at first, but then, on closer inspection, I could see how Jake had employed the same technique of darker cross-hatching on a neutral background, as if scratching the surface to produce that familiar shadowy effect. Perhaps even more with this colour combination the workings were exposed and benefitted from close and prolonged study. I knew then that this was a painting I should like to become more familiar with, a painting that satisfied on a number of levels, emotional, topographical, and aesthetic. It has not disappointed.

A Friend of York Art Gallery